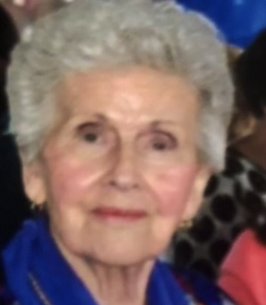 Julia was recruited right out of High School by Western Union to become a Calligrapher during World War II. Moved to Chicago by Western Union and put up in an apartment with 3 other women who were recruited by Western Union. In Chicago she met the love of her life, Michael. After a two-week whirlwind romance, he returned to Abilene, Texas waiting orders. He contacted Julia and asked her to marry him before he was sent overseas for four years with the 12th Armored Division in Europe as a Sergeant. Julia took a train down to Texas to be married on August 22, 1944, at Camp Barkley Texas. Julia was married for a little over 70 years to the LOVE OF HER LIFE, when GOD called him on November 16, 2014.