To share your memory on the wall of Esther Jarosh, sign in using one of the following options:

Family and friends are invited to a visitation at the Cumberland Chapels at 8300 W Lawrence Ave, Norridge, IL on Tuesday morning, April 13, 2021 from 9:00-11:30AM. A Mass of Christian Burial will be at Immaculate Conception Catholic Church, 7211 W Talcott Ave, Chicago, IL at 12:00 pm. Burial will follow at Maryhill Catholic Cemetery, 8600 N Milwaukee Ave, Niles, IL.

Due to COVID concerns a Remembrance Celebration for Esther will be announced at a later date.

MASKS WILL BE REQUIRED AT THE VISITATION AND ALSO AT CHURCH FOR THE MASS. SOCIAL DISTANCING WILL ALSO BE OBSERVED.

The Cumberland Chapels at 8300 W Lawrence Ave, Norridge, IL are honored to be serving the family. Online condolences may be sent by visiting https://www.cumberlandchapels.com

Esther’s family wishes to thank the Staff and Physicians of AMITA Resurrection Hospital, Rainbow Hospice, and Chicago Elite Homecare for their compassion, love, dignity and understanding in caring for Esther.

In lieu of flowers, a donation to the charity of your choice in memory of Esther M. Jarosh would be appreciated.
Read Less

To send flowers to the family or plant a tree in memory of Esther Jarosh, please visit our Heartfelt Sympathies Store.

Show you care by sending Flowers

We encourage you to share your most beloved memories of Esther here, so that the family and other loved ones can always see it. You can upload cherished photographs, or share your favorite stories, and can even comment on those shared by others.

Posted Apr 12, 2021 at 02:56pm
It was a short time to know Mom Esther. Her kindness, beautiful smile and selfless nature will live on forever. Sent with love and remembrance.

3 trees were planted in the memory of Esther Jarosh

Posted Apr 12, 2021 at 12:27pm
Leona (Lee) & Ray
Hey Sis, Everything you went through in your lifetime and yet you survived it until now. I will miss your visits to Wisconsin. We had good times - Bills Pizza- Casino and just visiting. Our phone calls telling each other how we Loved each other more & more ! I will Miss You !

Posted Apr 10, 2021 at 07:22pm
Mom, you were a very strong woman that survived a lot in your lifetime. Give Dad and Keith a big hug and many kisses from us .
We love you and will miss you very much.
Love ,Ted and Kathy
Comment Share
Share via: 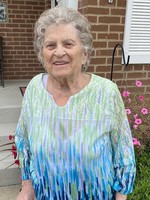