To share your memory on the wall of Carol Rio, sign in using one of the following options:

Print
Carol Ann (Wolf) Rio, departed for heaven on March 24, 2021, surrounded by the love of her family.

Carol was born February 20, 1938 in Chicago, IL, the firstborn of Charles and Helen (Sabas) Wolf, followed by her twin siblings Charles (â... Read More
Carol Ann (Wolf) Rio, departed for heaven on March 24, 2021, surrounded by the love of her family.

Carol was born February 20, 1938 in Chicago, IL, the firstborn of Charles and Helen (Sabas) Wolf, followed by her twin siblings Charles (â€śChuckâ€ť) and Helen (â€śDollyâ€ť), and later her sister Jacqueline (â€śJackieâ€ť). She grew up on Campbell Avenue, in a two-flat filled with extended family, and raised her three siblings while her parents worked multiple jobs to support the family. She graduated from Tuley high school, and was a candy striper at St. Elizabethâ€™s hospital for a short time, before entering cosmetology training. In May 1958, she married her sweetheart, Ralph Rio, who she met when she was 18, when he returned from serving in Korea, and who lived in another two-flat across the street from her. Ralphâ€™s parents Tony and Connie adored Carol, and Connie lovingly taught Carol to cook wonderful Italian meals. In 1959 she and Ralph welcomed their son John, and in 1963 their daughter Linda, both born at St. Elizabethâ€™s where Carol had volunteered. The family moved to the Jefferson Park neighborhood in 1968, where they lived for 45 years. Carol and Ralph made a home there for their family, and â€śSunnysideâ€ť became a welcoming home for extended family (who dubbed it the â€śholiday houseâ€ť), John and Lindaâ€™s friends, and annual fireworks displays for the whole neighborhood on the front lawn. They took annual trips to her familyâ€™s hometown of Ladd, Illinois, and also traveled to Wisconsin, Florida, Las Vegas, and took a few trips abroad, often joined by her life-long friend Helen.

Carol was a woman well ahead of her time. She worked her own way through cosmetology school and apprenticeships, and eventually went on to own and run two successful beauty salons, first in Jefferson Park and then her dream salon in Park Ridge. Very well recognized in the salon industry, she was President of both the Chicago and Illinois Cosmetology Associations, and was a leader in education and scholarship opportunities within her profession.

Even while working long hours and running a business, Carolâ€™s primary focus and deep love was for her family. She was very involved in the lives of her children and grandchildren, and moved her parents to an apartment five blocks from her home to care for them. She was the embodiment of compassion and kindness, and helped many family members and friends through rough times. She gave the best hugs, made the best spaghetti and meatballs, and was the most supportive daughter, sister, wife, mother, aunt, and friend anyone could have. She also held a strong Catholic faith, which she practiced throughout her life, and had a deep sense of spirituality and connection to God. Long after she couldnâ€™t remember anything else, she could recite a prayer or sing a hymn beautifully.

Despite the loss of her beloved Ralph in 2008, who affectionately referred to her as â€śRabbitâ€ť, and a series of surgeries and bouts with cancer, Carol preserved and continued working into her 70s. After the onset of dementia, Carol lived at Alexian Village in Elk Grove Village, and then moved to St. Patrickâ€™s Nursing Home and residence in Naperville, where she attended mass daily, and was lovingly cared for by skilled nurses and compassionate Carmelite nuns as her Alzheimerâ€™s disease progressed.

Carol was preceded in death by her loving husband Ralph, her parents Charles (Budâ€ť) and Helen, and her beloved sister Dolly. She is survived by her son John Anthony Rio, her daughter Linda Marie Rio (former spouse Lindsay), her grandchildren Katie Rosado, Kaelin, Ken and Lia Reichmann, her great-grandchildren Londyn and Ryder Rosado, her brother Chuck (Mille), her sister Jackie (Dalton), her brother-in-law Jim, and many nieces, nephews, and friends to whom she meant the world. She will be deeply missed and her familyâ€™s hearts ache for her loss, but her generosity and compassion lives on in all who knew her.

A small private service is being held, with plans for a larger memorial service this summer when it is safe. In lieu of flowers, the family requests donations to the Alzheimerâ€™s Association, at www.alz.org.
Read Less

To send flowers to the family or plant a tree in memory of Carol Ann Rio, please visit our Heartfelt Sympathies Store.

Show you care by sending Flowers

We encourage you to share your most beloved memories of Carol here, so that the family and other loved ones can always see it. You can upload cherished photographs, or share your favorite stories, and can even comment on those shared by others.

Posted Mar 26, 2021 at 01:11pm
I didnâ€™t know Carol but I just read her memorial and what a remarkable women. May she Rest In Peace.
Sincerely, Celia
Comment Share
Share via: 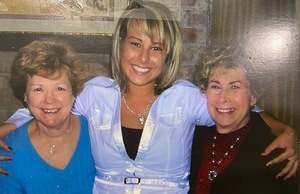